The Shabbat with Friends Ensemble has recently adopted the new name, The Sabbath Joy Ensemble, in Hebrew Lahakat Oneg Shabbat-להקת עונג שבת. Our ensemble brings to our Shabbat gatherings beautiful, joyful music that facilitates and inspires participatory community singing. Shabbat with Friends NM is part of the modern Jewish movement to reinstitute the playing of musical instruments on the Sabbath, reversing the ban that arose after the destruction of the 2nd Jerusalem Temple nearly 2000 years ago.

SWF is not organized around a formal synagogue worship schedule; rather SWF builds community through offering gatherings that revolve around Jewish home traditions of Shabbat feasts, hospitality, singing, and Torah study and conversation, and social connecting. The Sabbath Joy Ensemble is a frequent presence at our Shabbat activities. See the calendar on this website for gatherings when the ensemble is featured.

These are some examples.

Perhaps the most powerful way to express Jewish identity is through music and singing from the vast Jewish songbook. SWF is committed to giving individuals, families, and communities familiarity and ease in singing beloved Jewish rhythms and melodies from the generations and locations of thriving Jewish culture.

The Sabbath Joy Ensemble is led by Clara Byom (see below), Rabbi Dov Gartenberg (Vocals), and Jordan Wax (see below) Combining Rabbi Dov’s knowledge of the Jewish songbook and Clara and Jordan’s considerable musical talents, the Lahakat Oneg Shabbat will enthrall you with an authentic experience of Sabbath joy-Oneg Shabbat.

Starting winter 2023, Clara and Rabbi Dov are forming an Oneg Shabbat Singing Core for people who love to sing, who seek to expand their knowledge of the Jewish songbook and who would like to be part of a small group that serves as a catalyst for participatory group singing at our gatherings. Learn more HERE.

​Below are the bios of the members of the Oneg Shabbat Ensemble.
​ 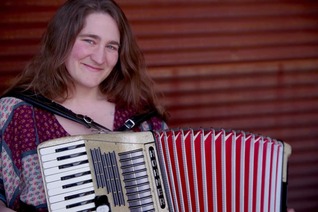 ​Clara Byom is the lead musician of the Sabbath Joy Ensemble. She is a versatile multi-instrumentalist, electronic musician, musicologist, arts administrator, and tunesmith who has been described as having “radiant energy” and “immense talent.” Clara has premiered over 40 new classical works as soloist, collaborator, or with the New Mexico Contemporary Ensemble, which she co-founded in 2016 with Dalton Harris. Clara frequently plays for contra, English Country, and International Folk Dance with The Parson Sisters and performs with the indie folk rock band Dust City Opera. Clara has a strong connection with Klezmer music through her work with the National Klezmer Institute. She holds a Master of Music degree from the University of New Mexico in Clarinet Performance and Musicology (2017) and a Bachelor of Arts degree from Luther College (2012).

​Rabbi Dov Gartenberg is the lead vocalist for the Oneg Shabbat Ensemble. He was ordained by the Jewish Theological Seminary (Conservative) and is a member of the Rabbinical Assembly. He is the Founder and Convener for Shabbat with Friends NM. He has served as Interim Rabbi at Albuquerque’s Congregation B’nai Israel. He spent most of his career in Seattle, WA at Congregation Beth Shalom. In Seattle he founded Panim Hadashot-New Faces, an innovative Jewish organization and community that serves as the model for Shabbat with Friends New Mexico. He received national recognition as a rabbinic innovator as a member of Synagogue 3000’s Emergent Communities Cohort in 2004. His most beloved mitzvah is Shabbat hospitality-Hachnasat Orchim. He is moved by Jewish participatory community singing and Jewish prayer. He is an acolyte of Joey Weisenberg who has led the renaissance in Jewish song. Rabbi Dov is also an avid student and teacher of rabbinic literature, Jewish history, and thought. 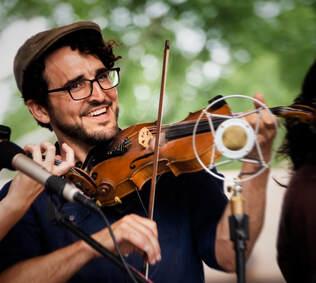 Jordan Wax (accordion, violin, mandolin, and vocals) is a multi-instrumentalist, singer, and traditional musician. For the past twenty years he has studied non-classical musical traditions with elders from a variety of cultural lineages in New Mexico, Mexico, and the Midwest. In 2019 he was selected by the National Endowment for the Arts to study klezmer through the New Mexico Folk Arts Apprenticeship Program. This program pairs master artists with students to keep traditional arts alive in the Southwest. He also studied Yiddish language at the Oxford Institute of Yiddish Studies and features a large Yiddish repertoire in his appearances.  He is a founding member of the StopGolus Collective, a cultural arts initiative dedicated to empowering young adults to explore Ashkenazi identity outside of the contexts of religious institutions.
​
Support Us